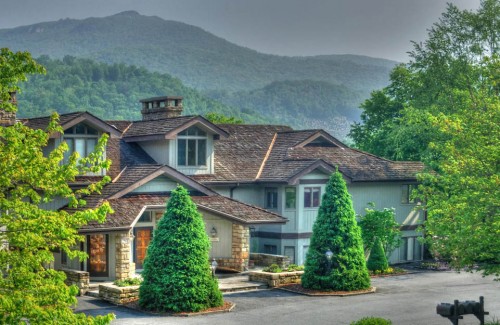 Elk River Club is blessed with abundance. Whether you’re taking in the stunning beauty of the Blue Ridge Mountains or enjoying the Club’s array of premier amenities, a sense of gratitude permeates everything we do. This is especially true when it comes to our community and the members who make Elk River Club such a special place. It’s this prevailing sense of gratitude that led several Club members to formalize a way for our community to share its blessings and improve the lives of the people and animals in our surrounding Avery County. This desire to give back ultimately created the High Country Charitable Foundation.

Making a Difference Down the Roadways of Avery County

The motto of the High Country Charitable Foundation only scratches the surface of the organization’s impact. HCCF Chairman Jim Ward relates a story that is the keystone of the Foundation’s mission to this day. While Chairman of the Equestrian Committee at Elk River Club, a man would walk by Jim everyday, never saying “hello!” Curious, Jim asked the manager what the problem was only to discover that the gentleman hadn’t had his hearing for 10 years. Jim gave the man his credit card to pay for a hearing test. It was revealed that with a hearing aid, the man would regain 60% hearing. Not long after, Jim received the letter that would lead to the founding of the HCCF. Upon being outfitted with a new hearing aid, the silent man walking the Equestrian center heard his son’s voice for the first time in a decade. Realizing that Elk River Club can and should be doing more for its community, HCCF was born.

A Parable About Making a Difference

There was a grocer named Mr. Miller who carried the finest produce in the area. His store served all manner of customers, but three boys who were regulars never bought anything. Too poor to pay for peas or potatoes with money, Mr. Miller would notice the boys admiring the produce and make a deal. Reliably carrying their prized marbles, Mr. Miller would barter, asking for a red marble one week, a green one the next, in exchange for the food. And invariably Mr. Miller’s mind would change, deciding he didn’t want a red marble that week, letting the boys keep their toys and sending them home with bags of fruits and vegetables. Years later, at Mr. Miller’s funeral, the three boys were there, one in his formal military uniform, and the others in tailored suits. Never forgetting Mr. Miller, the boys had come to finally repay their debt. As Mrs. Miller addressed the casket, she noticed something in her husband’s hand—three shiny red marbles.

This story about kind deeds leaving more of a legacy than kind words illuminates what makes HCCF tick. Mr. Miller could have gathered and hoarded his blessings, but he never did. In the end, it’s not what you gather but what you scatter that tells what kind of life you have lived! At Elk River Club, we’re keen to never lose sight of that.

Having raised over two-million-dollars since its founding, the HCCF and the members of Elk River Club have helped nearly 20 local organizations, counting among them groups like Children’s Hope Alliance, Feeding Avery Families, Avery County Humane Society, the Book Exchange at the Historic Banner Elk School, and so many more. After a year in which Elk River Club’s community involvement was more critical than ever, we look forward to continued growth and prosperity for our Avery County community.